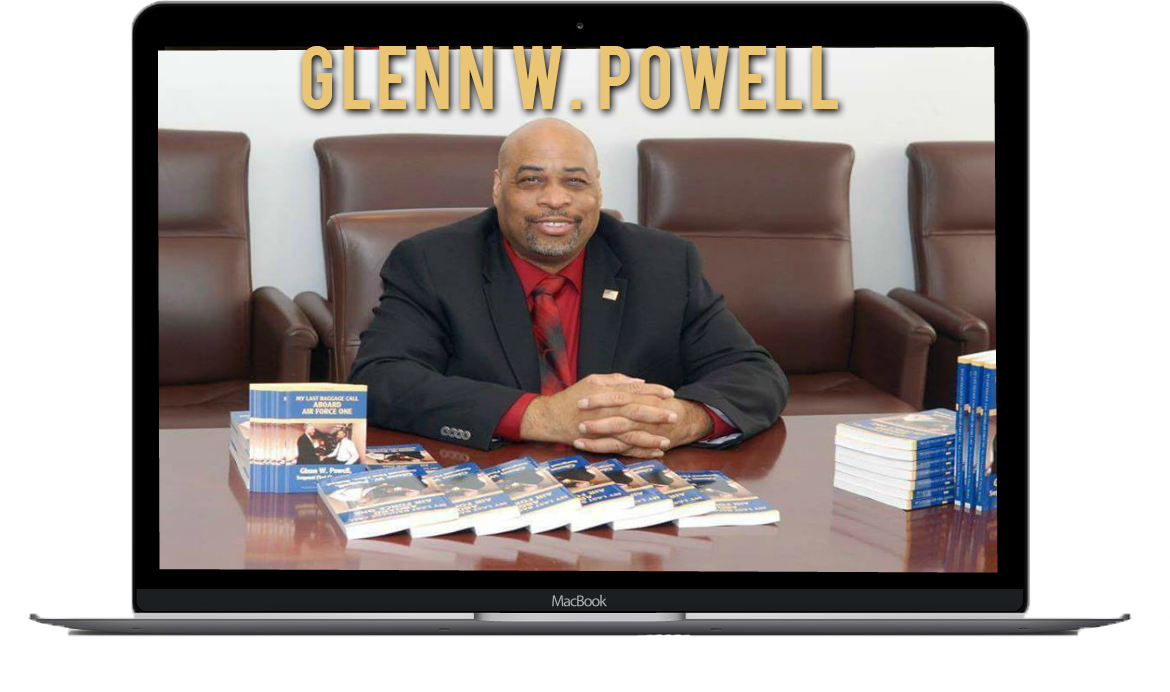 SFC Powell was born and raised in Toledo, Ohio. He says his real-life journey began in 1982 when he bypassed his high school graduation to join the U.S. Army. That journey would take him from Fort Dix, New Jersey, to Manheim, Germany where he met Ronda Holloway, a young, beautiful soldier and fellow Ohioan, who has been his wife and soulmate for 25 years.

Powell’s poignant and inspiring story includes both, his own memories, and memories from some 50 white house colleagues, family members and lifelong military buddies who enriched his life, and made an indelible impact on his journey. SFC Powell’s story is that of a restless young man who grew up in a working-class environment with ample opportunities to journey down the wrong path. Yet, thanks to his childhood village –the many role models whose lives exemplified the best in American values—made all the difference in his journey.

Except for that “village,” of his childhood, Glenn believes his story might have had a different ending. The hardworking citizens living purpose-filled lives, served as a buffer against the discontent and civil unrest plaguing the rest of world. The centerpiece of that village, Glenn says, was his parents who, while they never lived under one roof, both loved him unconditionally. Margaret Powell was a young single working mother, and a constant reminder of the importance of working toward excellence at one’s chosen career. She would become Kroger Stores’ first African American manager. His father, a prominent entrepreneur in the Toledo area, would remain a constant in Glenn’s life until the end.

Glenn says these lessons sustained him throughout his journey – from the pampered child, to the responsible teen, to the ambitious young soldier, to the doting husband and father; and the loyal and “never say never” Sergeant and aide to the President of the United States of America.

“My Last Baggage Call Aboard Air Force One” chronicles a most amazing journey that magically transformed Glenn Powell’s life, and so richly impacted those who knew him.

Purchase My Last Baggage Call Aboard Air Force One: A Journey of Sacrifice, Service, Family, and Friendship by Glenn W. Powell.  Buy from the Author.  Available in Print, PDF, ePUB, Mobi, Nook and Kindle. 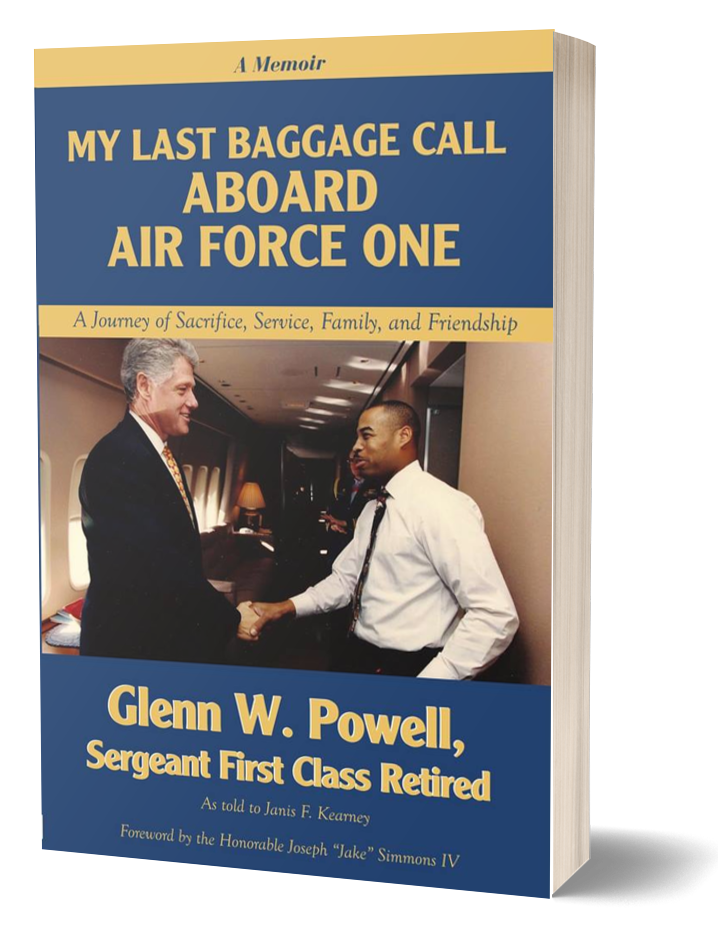 Sergeant Glenn W. Powell’s MY LAST BAGGAGE CALL is the story of a most unlikely young man who leaves his working-class environment of Toledo, Ohio, to become a soldier. Seeking excitement and a way to “make something of himself,” Glenn Powell’s journey exceeds his wildest dreams—a journey that began in basic training in Fort Hood, Texas ends at 1600 Pennsylvania avenue—the most important address in the world.

Glenn Powell’s first book, “My Last Baggage Call Aboard Air Force One,” is a memoir, a book of inspiration. It’s a book that shares struggles, and how one can overcome those struggles. It details one young man’s belief in himself, and his belief in the goodness of humankind.

SFC Powell retired with distinction from the Military in 2002. He received numerous awards and decorations throughout his service, including the Legion of Merit Medal, Meritorious Service Medal, the Joint Service Achievement Medal, and the United States Army Achievement Medal with four oak leaf clusters. He received U.S. Service Ribbons for both domestic and overseas service.

Sergeant First Class Glenn W. Powell’s amazing journey has been one of sacrifices, service, and life-changing miracles. This beloved son of Toledo, Ohio envisioned his future, then set about to make it a reality. Never in his wildest dreams would he have imagined his life would end up as it did; serving not one, but three Presidents of the United States, meeting global leaders as he traveled around the world.

In December 1995, Glenn W. Powel assumed the duties of transportation supervisor for Air Force One. He was featured in the National Geographic: Inside American Power Air Force One Documentary. Rent the DVD from the excerpts page.

In January, 2001, during Glenn's service under President George W. Bush, SFC Glenn Powell was transferred to the White House Military Office, Customer Support and Organizational Development where he served as deputy director. 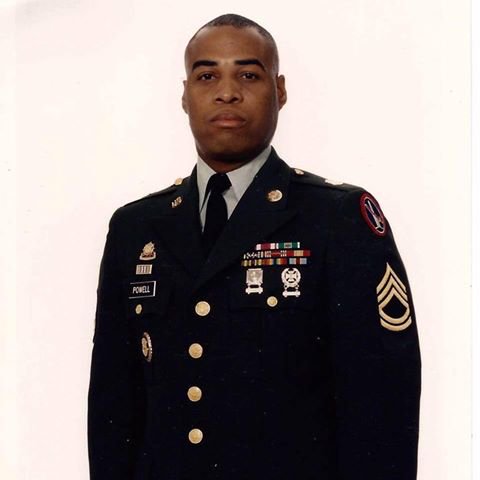 Sergeant First Class Glenn W. Powell (Retired) is a native of Toledo, Ohio. He enlisted into the United States Army in 1982 and retired in 2002. During his military career, he served as a heavy vehicle driver, a squad leader, and non-commissioned officer.

In September 1991, SFC Powell joined the George HW Bush White House as a chauffeur, and in 1992, was promoted to transportation coordinator for the white house Press Corps, serving in the Clinton Administration.

In December 1995, he assumed the duties of transportation supervisor for Air Force One.

In January 2001, during his service under President George W. Bush, SFC Powell was transferred to the White House Military Office, Customer Support and Organizational Development where he served as deputy director.

SFC Powell retired with distinction from the Military in 2002. He received numerous awards and decorations throughout his service, including the Legion of Merit Metal, Meritorious Service Medal, the Joint Service Achievement Medal, and the United States Army Achievement Medal with four oak leaf clusters. He received U.S. Service Ribbons for both domestic and overseas service.

Glenn and Ronda Holloway Powell have been married for 25 years, and have three sons, Darius, Warren, and Glenn, II. They reside in Virginia.

For more information, or to contact Glenn Powell regarding availability for speaking opportunities, please email him at glennwpowell@aol.com 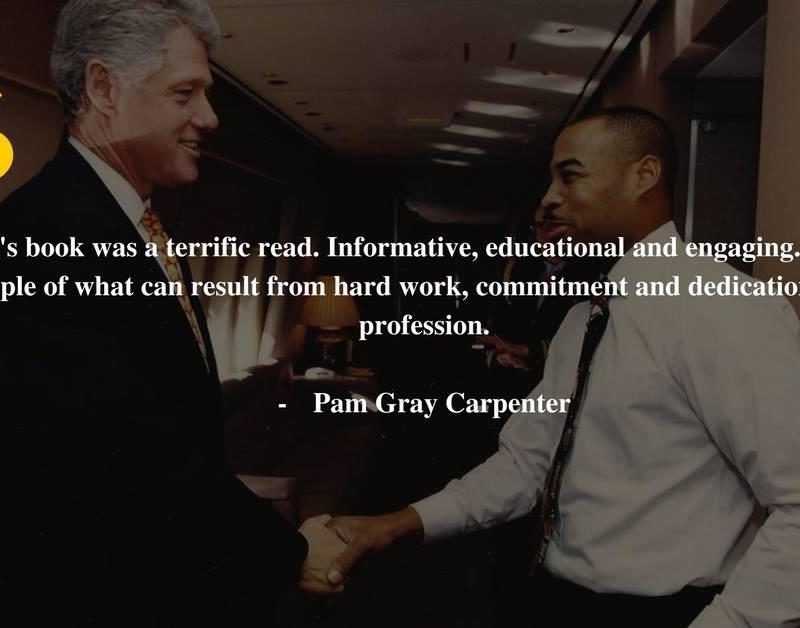 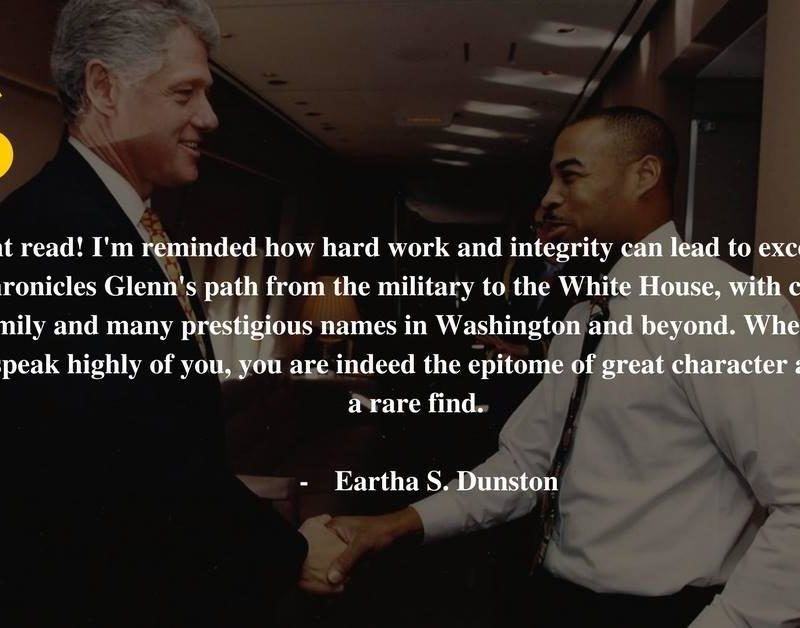 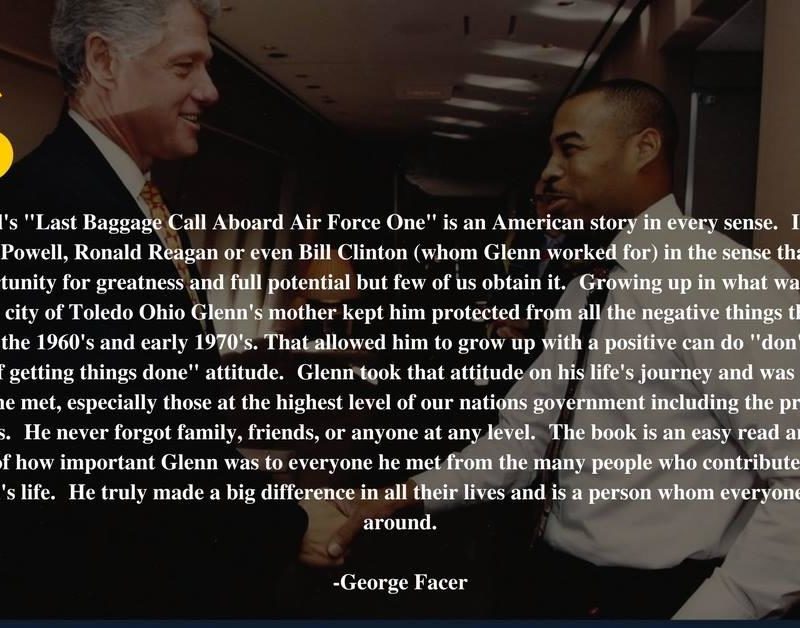 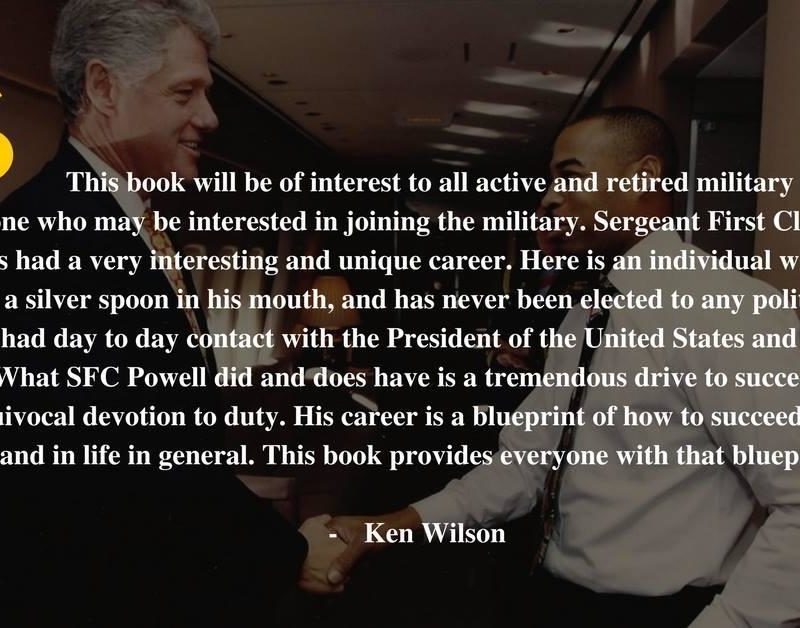 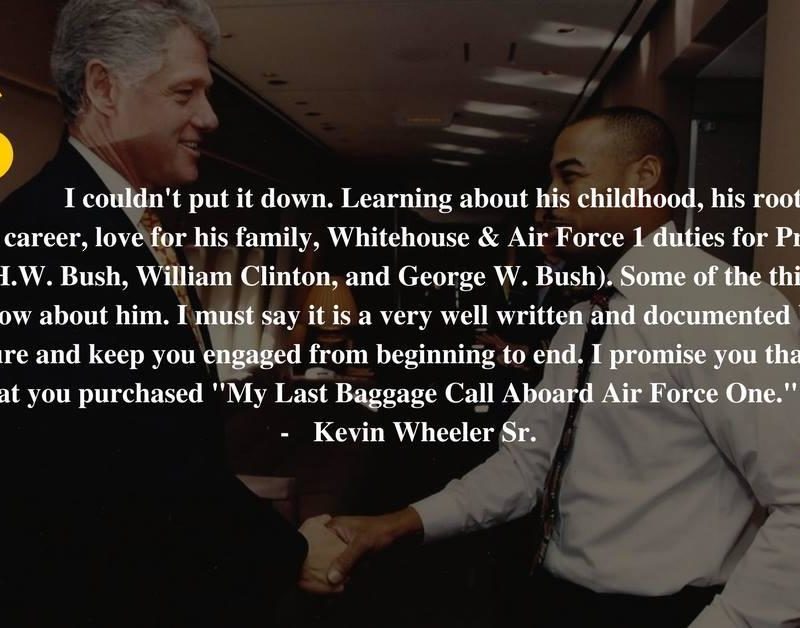 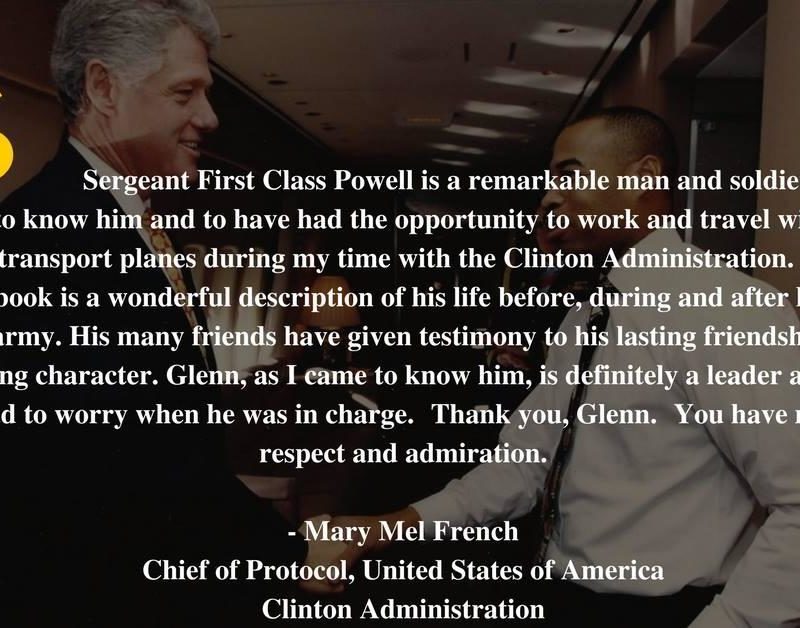 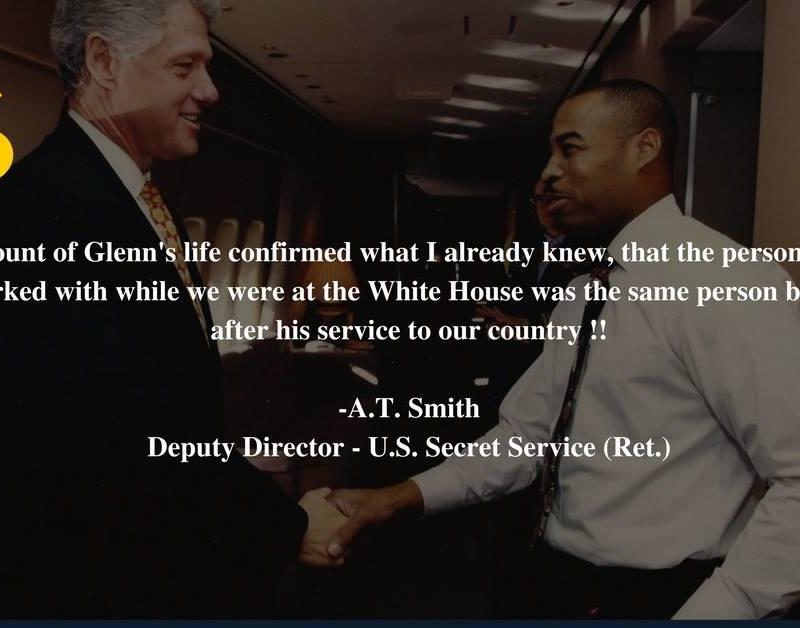 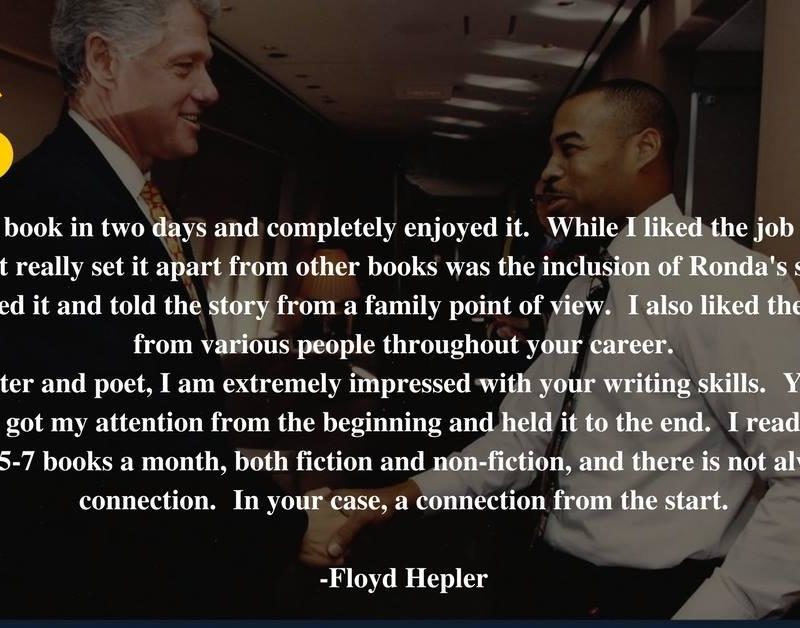 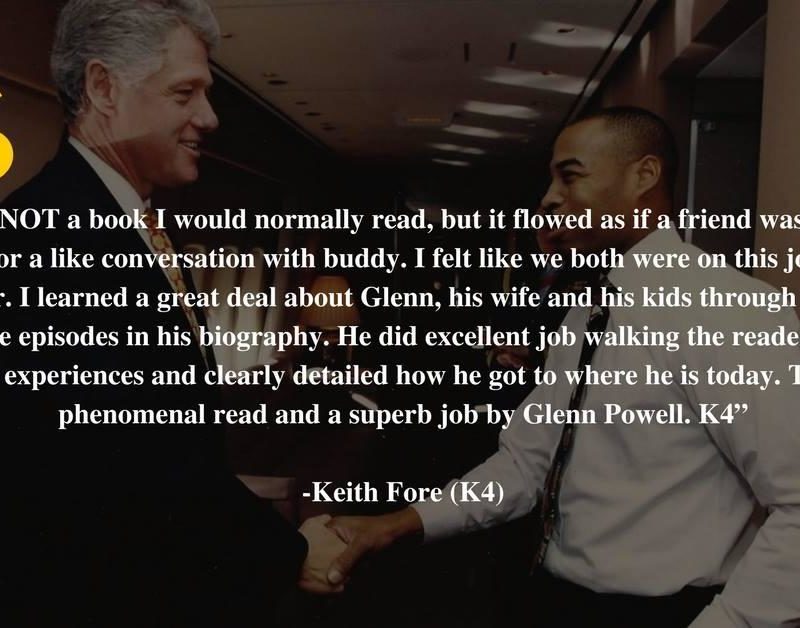 Please click on each image to view the book reviews in full screen. Order books from author.
Buy Now 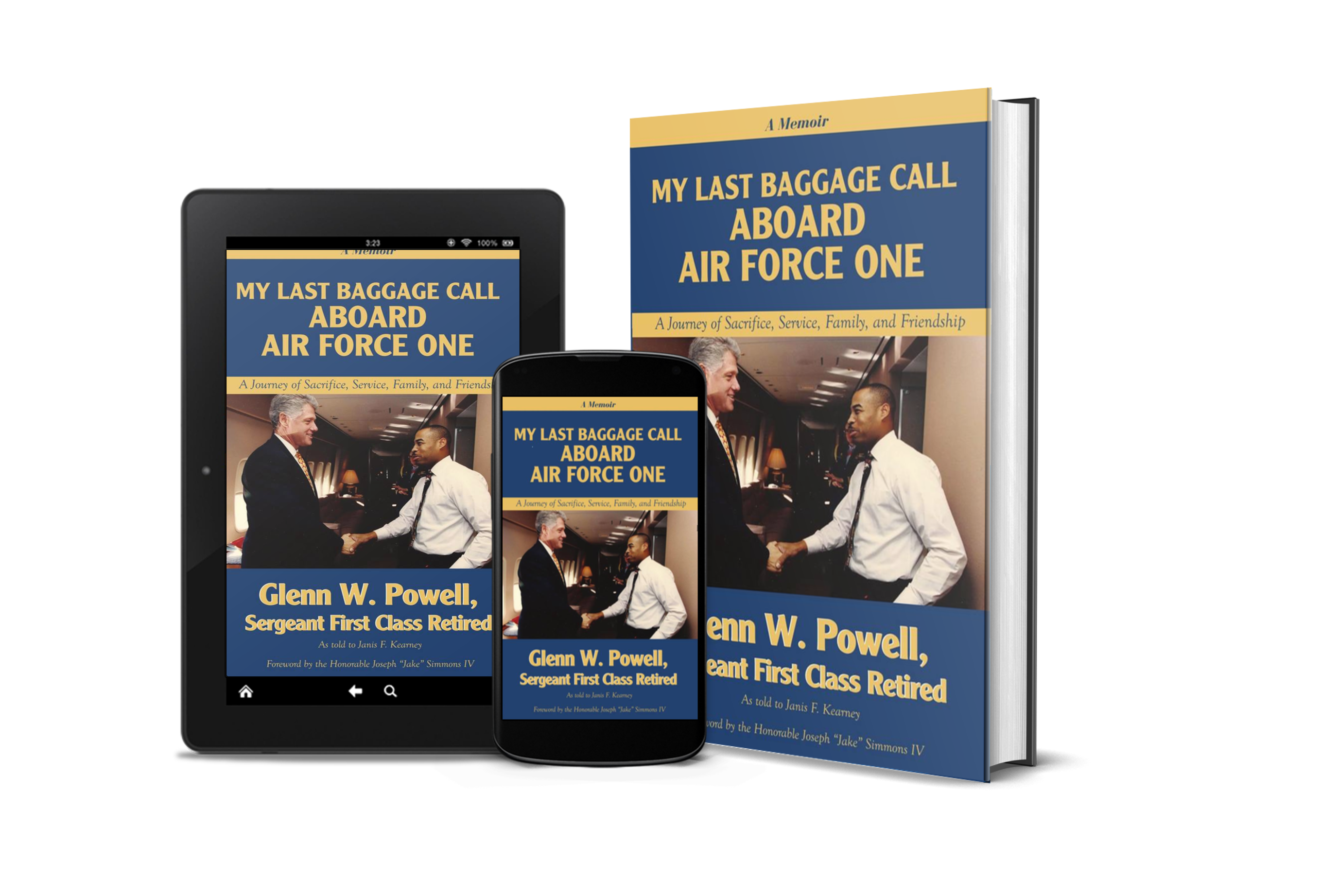